Tasmania is known for its architecturally significant buildings of old and new. Unbeknownst to many, one architect defined the grand stone structures that shape much of the state as we know it today.

Tasmania is home to hundreds of stunning and significant architectural treasures, ranging from elegant colonial buildings through to contemporary art galleries. Hobart’s Parliament House, the barracks at Willow Court in New Norfolk and Hobart’s Campbell St Gaol personify the architectural style of early Tasmania… and they were all designed by one man: John Lee Archer.

John Lee Archer was the Civil Engineer and Colonial Architect in Tasmania from 1827 to 1838. During this time, Archer was responsible for the design and construction of Tasmanian government buildings, including barracks, gaols, houses and other iconic Tasmanian structures.

The most significant building designed and built under Archer’s guidance is Hobart’s Parliament House, completed in 1838. Originally, the building was a customs house and it used to be much closer to the water than currently (as the foremost areas of Hobart’s modern waterfront lie on reclaimed land).

Another Hobart landmark that bears Archer’s signature is the Penitentiary Chapel, located on the corner of Brisbane and Campbell Streets. This building served a grim purpose: underneath the chapel are cells used to keep prisoners in solitary confinement. The tower of the chapel was inspired by the works of Sir Christopher Wren, the famed English architect who designed St. Paul’s Cathedral in London.

Archer designed the Canteen Building at Anglesea Barracks (Australia’s oldest army barracks still in use) from the early 1830s, and the Drill Hall and Subalterns’ Quarters, both from 1828. The sandstone Ordnance Stores on Castray Esplanade were designed by Archer and date from 1829.

In a colony that relied on convicts, it was only natural that Archer would create buildings designed to maintain law and order. He was responsible for the court houses in Hobart, Launceston and New Norfolk as well as the police offices in Hobart’s Murray Street. Other Archer-designed jails were the Richmond Gaol and the Oatlands Gaol, the Female House of Correction in Launceston, the factory building at Maria Island and the Female Factory at Cascades.

Archer was the architect of many beautiful colonial houses. At Maria Island, for instance, visitors can still see the Chaplain’s Cottage and the Commandant’s House, both from the late 1820s, while the Gaoler’s House in Richmond was built according to an Archer design.

Another important feature of early Tasmanian life was the need for lighthouses along the coast — the two designed by Archer are the Low Head Lighthouse, and the Cape Bruny Lighthouse. Archer contributed to roads, bridges and harbour improvements required by the colony, and designed the Bridgewater Causeway and Australia’s third oldest bridge still in use, the Ross Bridge. 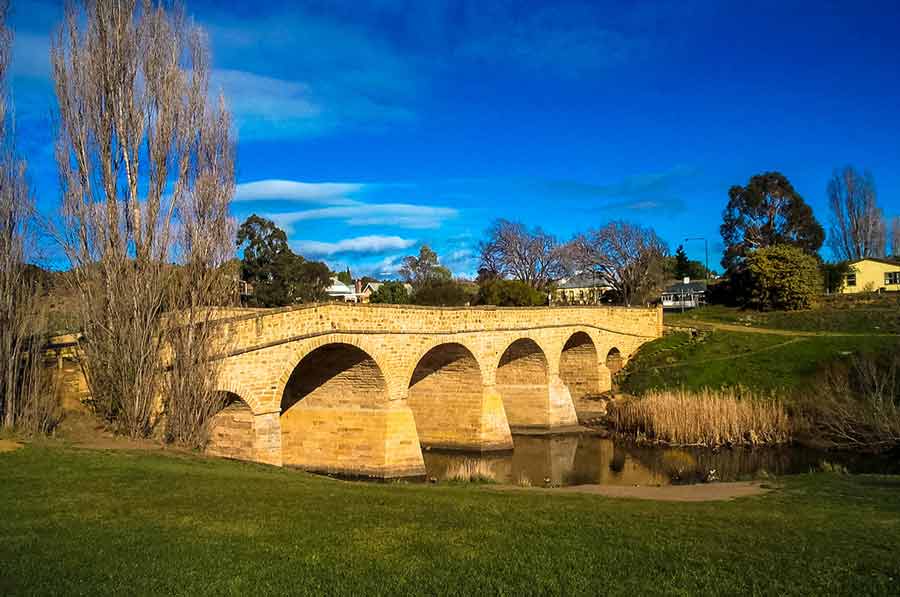 Archer was responsible for repairs to the Richmond Bridge, the country’s oldest bridge still in use.

Archer was born in Kent, England in 1791. His mother was English and his father was an engineer from Ireland. The young Archer started his architectural training with a London-based architect in 1809, when he was 18 years old. In 1813, he got the job of drawing clerk in the office of the renowned Scottish civil engineer John Rennie. Rennie was responsible for projects such as the London Docks, the Liverpool Docks, the Plymouth Breakwater and the Leeds Bridge.

Rennie employed Archer until 1818 and the young man moved to Ireland, where for eight years he worked as engineer. One of his projects during this time was the Royal Canal in Dublin. In 1826, the son of his former employer John Rennie recommended him for a new position, that of Colonial Architect in the young colony of Van Diemen’s Land. Archer leapt at the chance and set sail for Hobart, where he arrived on 2 August 1827.

In 1833, Archer married a local girl, Sophia Mattinson, and the couple moved to New Town, where Archer had built them a stately home called Jutland. However, in 1836 Captain Roger Kelsall of the Royal Engineers arrived in Van Diemen’s Land and became responsible for military building projects, including the church and barracks at Port Arthur. A year later, Lieutenant-Governor Sir John Franklin arrived in the colony and by 1838 Archer’s position was made redundant to save costs. In October of that year, Archer became police magistrate for the Horton district, which later became known as Circular Head and today is Stanley on the north-west coast. He remained police magistrate until his death in December 1852 and is buried in the Circular Head Cemetery, which lies at the foot of The Nut in Stanley.