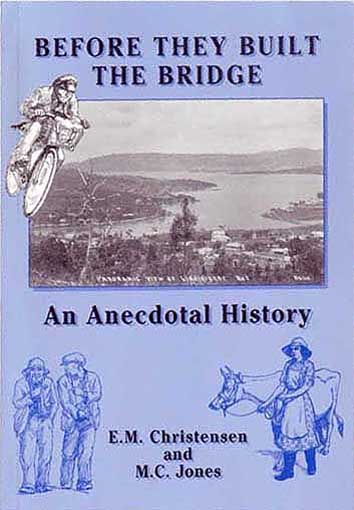 Before They Built the Bridge – EM Christensen and MC Jones

Before They Built the Bridge by E.M. Christensen and M.C. Jones is a lighthearted look at suburban life during the first half of the twentieth century. Based on anecdotes collected from more than eighty elderly residents of Lindisfarne, Hobart’s second-oldest Eastern shore suburb, supported by documentary evidence wherever possible, and illustrated with period photographs from the authors’ own collection as well as amusing sketches by E.M. Christensen, the book includes a location map, comprehensive historical notes and a detailed index.

While the book does try to be historically accurate, it is unashamedly biased and opinionated. The chatty style accurately evokes the atmosphere of the times, providing an enjoyable dip into the past for younger generations while triggering memories and stimulating heated discussions among older readers.

A sample recollection is below:

In 1910 a company called Complex Ores Limited won a contract to supply electric street lighting to New Town. In Lindisfarne we had been paying close attention. We invited Mr H.J. Spencer, the Gas Company’s electrical engineer, to attend a meeting of the Progress Association and explain how we could replace the inefficient old oil lamps that served us as street lighting. He told us that service wires could be attached to private houses, that the supply of electricity would be available for use all night, as well as during the day and went on to say that it could be used not only for lighting, but for cooking, and people in Melbourne were actually finding it cheaper for cooking than gas. Besides that, it could be used to drive motors for sawing wood and so forth. It did not smell, rooms stayed cool, and it did not tarnish or injure the colouring of the walls or ceilings the way oil and other lights did.

The Hobart Gas Company was prepared to provide a service if they had a firm undertaking that a total of two hundred houses in Bellerive and Lindisfarne would use it.

Well! Hands went up all over the hall. Mr Matthew Simmons, who could not be present, had sent a message to say he would have the electric light installed at his house immediately it was available. Everyone agreed with Mr Newham Waterworth who said we had everything to gain and nothing to lose. Mr Spencer went back to the Gas Company well pleased, and they were soon calling for tenders to provide equipment. We were a bit disappointed to discover we lived so far away from the centre of Lindisfarne that we would have to pay extra to have a line up our hill, but we were used to our kerosene lanterns and candles. It was not a great hardship to wait until there were more people living nearby to share the cost. The Cartela was used to lay an electricity cable across the river from below Government House to Rosny Point in April the following year, Mr Alf Cuthbertson put up poles to the two townships, and electricity came to Lindisfarne the week before HMAS Geelong, the first troopship, left Hobart with our boys bound for the Great War.

Complex Ores Limited began digging holes to divert rivers in the Great Lake area with the intention of setting up a hydro electricity generator. After many vicissitudes which included near bankruptcy and several extensions of time on their contract their hydro electric power station at Waddamana opened in 1916. A temporary underwater cable was put across to Shag Bay from a substation at the Electrolytic Zinc Works and overhead lines brought power to Lindisfarne. When the whole service was upgraded in 1924 the lines came all the way to our house. Anyone who enjoys candlelight suppers will understand why electric lights were such a sensation. They were so bright we were almost afraid to turn them on! Electricians were careful to place the big brass switches too high for little fingers. Toddlers thought it a great treat to be lifted up by Dad or Auntie to switch on the light. Some people were very nervous about electricity and were afraid of being Blown Up. Aunt Mabel always made sure she turned off the main switch before she went to bed at night.