Looking in to Macquarie Harbour from outside Hells Gates

The jewel in the crown of Tasmania’s Western Wilderness is Macquarie Harbour, an expanse of water six times the size of Sydney Harbour and surrounded by rugged mountains, ancient forests and fascinating history. Whether you are a visitor to Tasmania or live here, Macquarie Harbour and it’s surrounding areas will provide you with a get-away second to none and one you will remember for many years to come.

About four hours’ drive from Hobart, Strahan, the small port-town on the harbour, is the ideal place to stay and from there you can access all that Macquarie Harbour has to offer – and there is a lot to keep you occupied… you can go on cruises of the harbour and the Gordon River, visiting sites such as Sarah Island and Hell’s Gates along the way. The Cape Sorell Lighthouse, the Southern Hemisphere’s second highest, is at the southern end of the harbour mouth. If you want a bird’s eye view, you can enjoy a scenic flight over the area.

Coming back in to Macquarie Harbour through Hells Gates

The harbour is a fantastic fishing spot and you’ll even find large salmon farms here. To the north of Hell’s Gates is Ocean Beach, the longest in Tasmania and a great place for bird-watching or enjoying the sunset. There are many hiking trails too, among them the Rainforest Walk, which allows you to spot wildlife or marvel at the waterfalls and raging rivers in the area.

There is plenty of accommodation in the Macquarie Harbour area, not only in Strahan but also in nearby towns such as Queenstown and Zeehan. If you prefer roughing it in this vast wilderness, however, you may want to opt for the Macquarie Heads Camping Ground on the northern end of Hell’s Gates. The Macquarie Heads are one of the area’s best dolphin-watching spots. Facilities at the camping ground are basic but you’ll find a boat ramp and easy access to the beach and the dark waters of Macquarie Harbour.

Some of the things to do…

A Great Australian Secret Experience….. “We at Great Australian Secret have taken both of the main cruises offered by World Heritage Cruises and Gordon River Cruises and cannot recommend them enough. Both companies were welcoming and friendly and we felt, gave great value for our money. A cruise around Macquarie Harbour is something you just have to experience. On the day we went the weather was all over the place and we had sun, rain and wind. This in no way detracted from our brilliant experience and our advice is to not let the weather stop you from going. Do it, you won’t regret it.”

At Heritage Landing on the Gordon River

The History of Macquarie Harbour

The original inhabitants of the Macquarie Harbour area were the Lowreenne and Mimegin bands of the Toogee people. They called the harbour Meebberlee. However, bands from other tribes also visited the area for hunting and fishing. Shell middens, stone tools and, Darwin glass found in the area, for example in the Kuta Kina Cave, show that these people had been living in the area since about 20,000 years ago. As protection against the heavy rain and strong winds here, they built durable huts from branches and bark. They also used the bark of the swamp tea-tree to build boats for crossing the treacherous harbour mouth, later named Hell’s Gates.

Cruising back down the Gordon River after leaving Heritage Landing

The isolation of Macquarie Harbour meant that the Aboriginal people lived here relatively undisturbed for longer than their countrymen elsewhere in Tasmania. However, it was this isolation that also drew the interest of the colonial authorities. The first European on record to have visited Macquarie Harbour was James Kelly, who entered the harbour in a whaleboat in about 1815. Later explorers and surveyors told of the vast forests and in 1822, the Macquarie Harbour Penal Settlement was established. The main settlement was on Sarah Island but there were outstations all along the harbour. The idea was that the convicts could cut timber and build ships, since Lieutenant-Governor William Sorell envisioned an economically viable penal colony.

Life in the penal settlement was harsh. The convicts were chained together and made to cut down the huge Huon pine trees, then rafting the logs down rivers such as the King and Gordon Rivers, which flow into the harbour. Hard labour here meant not only being hungry and tired but also cold and wet. Naturally, many convicts tried to escape but only a handful actually made it to freedom. Several others tried to escape through the woods and disappeared without trace.

Approaching Strahan at the end of the cruise

A perfect example of just how harsh the terrain around Macquarie Harbour is, is the story of Alexander Pearce. Pearce was an Irish convict who, with seven others, escaped in late 1822. The only weapon they had with them was an axe, which made hunting nearly impossible. As the men found themselves starving and miles away from civilization, they started drawing lots. The loser would be killed and eaten. Eventually Pearce was the last man standing and he made it through the wilderness to civilisation. When he was captured, nobody in Hobart believed his story and he was sent back to Macquarie Harbour. He escaped again, this time with only one companion. Within ten days he was captured but his companion was nowhere to be seen. However, in his pockets Pearce had some meat that was definitely not pork or mutton. He was hanged in Hobart in 1824. 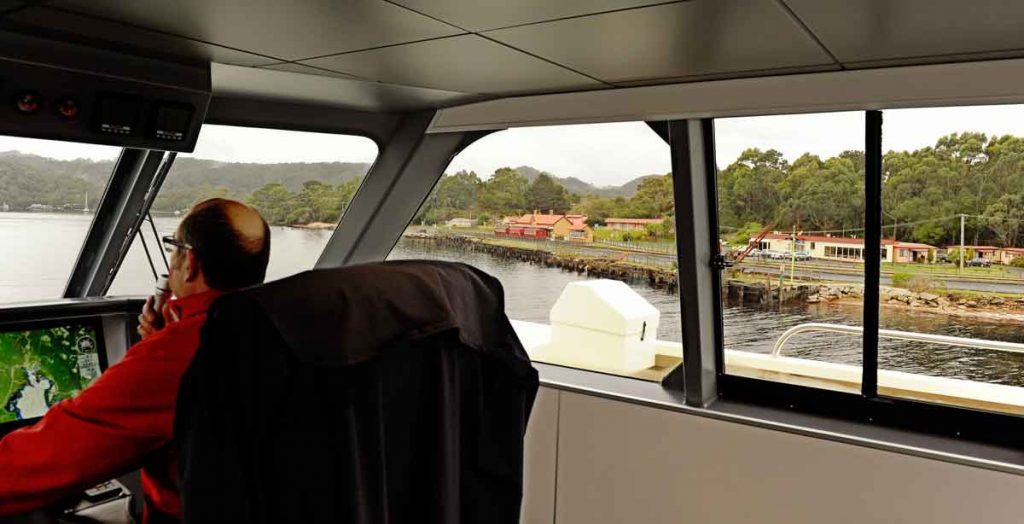 Approaching Strahan at the end of the cruise. The Strahan terminal of the West Coast Wilderness Railway can be seen on the right.

The penal settlement was closed in 1833 and by 1877  Port Macquarie had a small port along its northern shore, at Strahan. Today Strahan is the main base from which to explore the area.

The West Coast Wilderness Railway from the waters of Macquarie Harbour

If you would like your business or organisation listed or featured on this page or, if you would like to share your experiences or images of Macquarie Harbour and Strahan, then please contact us here.[sc:EndOfWestCoastPage]