Originally the service port for the mining town of Zeehan, Trial Harbour, once a thriving town with shops, hotels and businesses is now home to just 46 houses that are mainly holiday shacks with just a few permanent residents. Just 30 minutes from Zeehan, Trial Harbour is a picturesque surprise after journeying the gravel road through rain forest and button grass plains. There are magnificent surf beaches, fantastic views and great fishing.

In the summer the place comes alive with people camping, swimming, fishing, bushwalking, four-wheel driving and just enjoying the incredible outdoors. Everything about Trial Harbour nowadays says ‘relax, rejuvenate and take it easy.’ There’s lots to explore with relics of the old Federation and Cornwall mines nearby …buildings, shafts, tunnels and bits of old machinery to be found in the surrounding bush.

The foreshore at trial harbour

Camping in Trial Harbour is free and when you come, bring everything that you will need with you as there are no shops there now. When you go, take only the fish you have caught, the photos you have taken and everything else you brought with you, including your rubbish. Respect the surrounding bush and the relics of the past and leave behind only your footprints. Trial Harbour really is the Wild West of Tasmania

Places to stay in Trial Harbour

Getting to Trial Harbour.

Getting there is easy but you do have to drive carefully, especially if you are not used to gravel roads. Trial Harbour is 317 kms from Hobart and around 250 from Launceston. Make your way to Zeehan, which is about 43 kms from Strahan. Head north out of Zeehan on Heemskirk Road and turn left onto Trial Harbour Road about 3 kms from the centre of Zeehan. It’s then about 20 kms.

Arriving at Trial Harbour. Drive the gravel road with care.

A Great Australian Secret Experience – We visited Trial Harbour during the winter months, and of course it rained! The sea was quite rough and spectacular and our walk along the beach was exhilarating. Even though the weather was not the best we could see what the area would be like during the summer months and holiday periods. We visited the free camp site – which was deserted of course and stood on the beach and looked out to sea. It was quite strange and overwhelming to realise that the next landfall over the horizon would be the east coast of South America all those thousands of miles away. We can’t wait to go back in the summer.

As we left Trial Harbour on our way back to Zeehan we saw to our right a white object half-way up a mountain and took a photo of it, wondering what it was. You can see it in the photo below and below that is the object zoomed in …someone there has a sense of humour!

The white object we saw half-way up the mountain.

The township came into being in the 1880’s as the port that served Zeehan. It’s original name was ‘Remine’ which was the native name for the plant Blandfordia which grows all around the area. The name ‘Trial Harbour originates from a small vessel called ‘Trial’ that arrived, carrying the new manager of the nearby Montagu Mine. Overnight the Trial was blown up onto the beach during a gale and shortly after Mr George Davies of the Hobart Mercury newspaper arrived. He asked the name of the boat on the beach and raised his glass with the toast “Here’s to the health of Trial Harbour” and thus the name came into being on March 10th 1881. 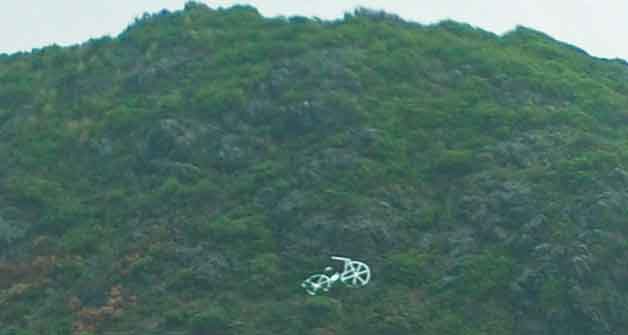 Someone has a sense of humour!

In 1891 the total population was around 200 permanent people and there was a general store, a blacksmiths shop, an eatery, a couple of hotels and post and telegraph offices and quarters for police – or troopers as they were then known.  Include all the houses that had sprung up with the camps and tents all around and it was a pretty busy place.

The South Heemskirk mining area was to the North East with Zeehan to the east just over 20 kms away. Transport was by  pack horse and the roads were rough.

The Trial Harbour Hotel in the late 1800’s

In February 1887  nearly every building was destroyed by a bushfire that swept through the area. Most of the buildings were rebuilt and the bustle of the town continued. However in 1892 the railway between Zeehan and Strahan opened and this diminished Trial Harbours usefulness to the point where it was no longer needed. A few years later the town was destroyed again by another bushfire and this time it was not rebuilt. Nearly everyone left and the area was not reoccupied until the next century had well and truly started.

Nowadays the bustle and noise of a busy frontier town servicing the mining industry has been replaced with relaxed peacefulness, the sound of campfires, cameras clicking, children playing and people enjoying themselves, all overlaid with the sounds of the bush and the sea. 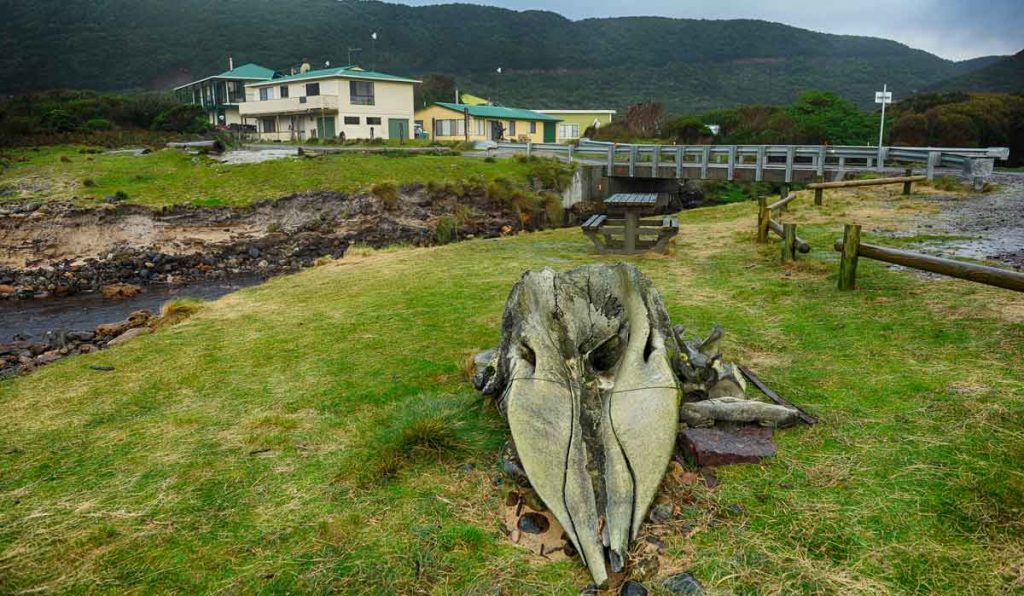 The whale skull on the foreshore at Trial Harbour