Spread over an area of one million hectares and covering roughly one fifth of the island, Tasmanian wilderness is indescribable via written or visual format and must be seen and felt to be experienced.

Tasmania’s wilderness is undeniably world class. Visiting many of Tasmania’s attractions will uncover wilderness and wildlife of some sort, however the destinations below specifically showcase the globally recognised natural scenery Tasmania has to offer.

Many of the designated wilderness regions in Tasmania are located inside protected National Parks, and feature picnic areas, camping spots, photo opportunities and designated walking trails. Most areas are accessible by car in under two hours drive from Hobart or Launceston.

Walk high above the tree tops. 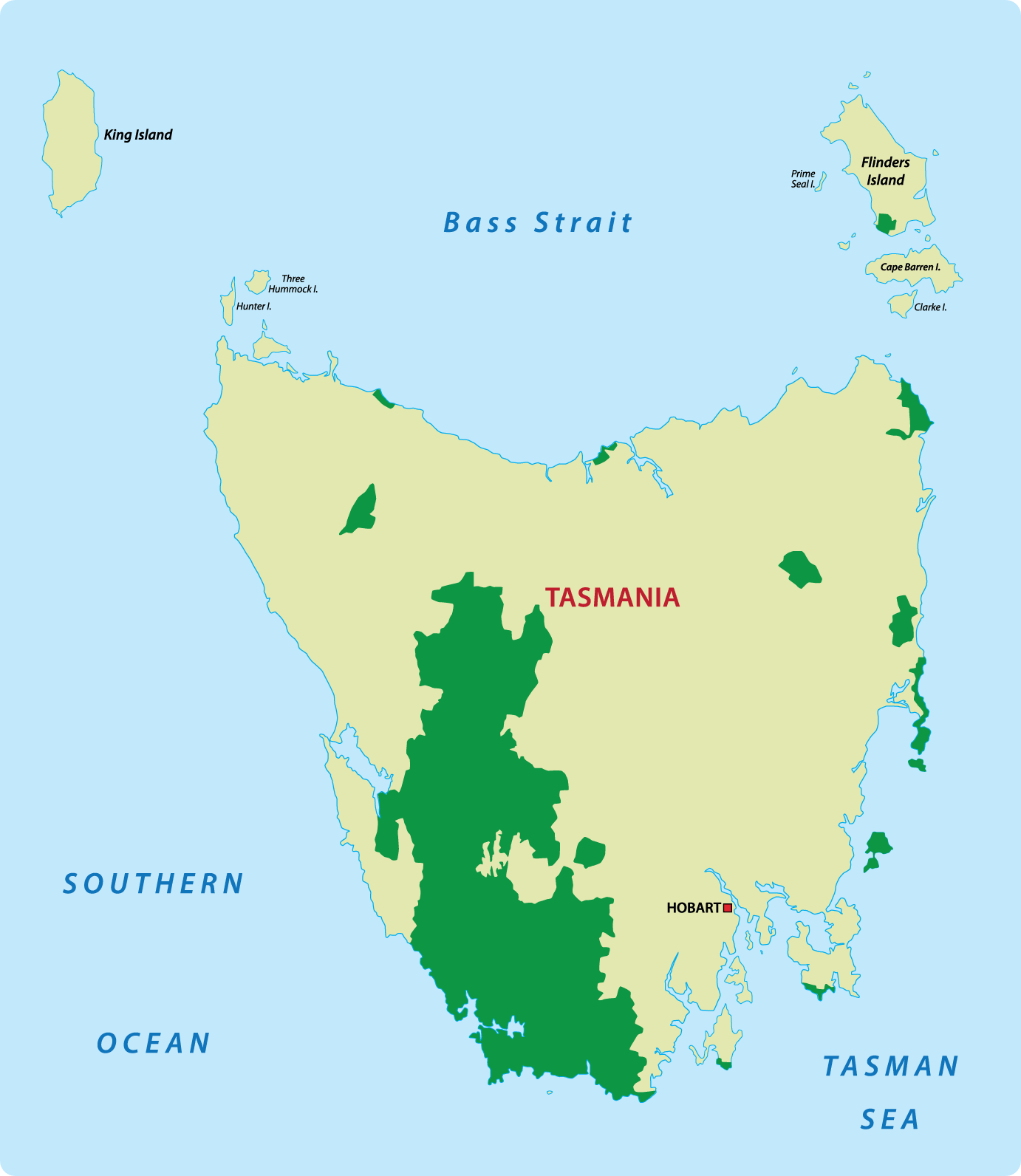 The scenery and forest of Mount Field National Park changes as altitude increases: Stringybark and other eucalyptus species dominate lower regions, while tougher alpine vegetation flourishes at higher altitudes. Exploring the park by car is a good way to experience this dramatic change in wilderness.

Mount Field National Park attracts visitors all year round and provides activities for all seasons. Camping, bbq areas, guided tours, snow skiing, snow sports and bush walks of various lengths are offered by the park. A short, paved walk through lush rain forest to the stunning Russell Falls is a must, and many visitors decide to follow this with a coffee or meal at the nearby Waterfall Cafe.

The Cradle Mountain–Lake St. Clair National Park is situated between two ancient Tasmanian icons: the majestic Cradle Mountain and the deepest freshwater lake in Tasmania, Lake St. Clair. The region was declared a national park in 1922 and is part of the protected Tasmanian Wilderness World Heritage Area.

Echidnas, quolls, Tasmanian devils, platypus and dozens of species of birds roam free, and historic Aboriginal sites are scattered through the park. An Aboriginal Cultural Walk begins from Lake St. Clair and provides an interesting opportunity to explore these historic cultural sites.

The terrain around Lake St. Clair is great for short leisurely walks, however the highlight of the region is the Overland Track, one of the most popular treks in Tasmania. Beginning from the Cradle Valley, this six day adventurous walk runs through the length of the park and ends at Lake St. Clair.

Lake cruises and scenic flights are other ways to enjoy the magical beauty of this majestic park.

2 ½  hour drive west of Hobart to the southern entrance near Derwent Bridge.

2 ½ hour drive from Launceston to the northern entrance at Sheffield.

The Franklin-Gordon Wild Rivers National Park is one of the most remote national parks in Tasmania and features the Franklin and Gordon Rivers, two of the state’s most spectacular watercourses.

The lower Gordon River has close ties to Tasmania’s early convict era due to extensive timber extraction carried out by convicts in early settlement times. The region also features KutiKina Cave, an Aboriginal heritage site located on the Franklin River.

Rafting, kayaking and river cruises are the main water activities available to visitors, meaning summer is the best time to visit this park. Visitors can enjoy short walks to Donaghy’s Hill Lookout and Nelson Falls.

A 56 km long section of the Lyell Highway passes through the park between Derwent Bridge and Queenstown and features a number number of picnic spots along the way.

Access:  The Lyell Highway leads to the northeastern entrance at the King Williams Saddle.

From Queenstown: 30 mins drive to Nelson Valley, the northwestern entrance.

The Southwest National Park contains some of Tasmania’s most remote and untouched wilderness, and access to these areas is very limited. Spread over a huge area of 600,000 ha, this area became a National Park in 1956 and was later included in the World Heritage List as one of the last temperate wildernesses on earth. No region in Australia can match the inspiring, remote beauty of the park’s landscape.

The ruggedness of the area paired with unpredictable weather prevents human advance and as a result much of the landscape remains untouched. Few roads enter the park and in most areas vehicular access is not possible. The region’s remoteness adds to its beauty and wealth as a national treasure.

Button grass plains, jagged mountains and dense rainforest are the predominant natural features of this park and its southern borders are protected by the wild windswept coastline of the Southern Ocean. Many of the river valleys are home to unique flora and fauna species like alpine cushion plants and sea pens. Endangered yellow bellied parrots also seek shelter here.

Although a scenic flight is the best way to witness the mesmerizing beauty of the park, bushwalking and camping are the best ways to to experience the region’s wilderness at close hand. Bushwalking here is demanding: there are day trails and short walks however only experienced walkers should attempt treks like the 70km long Port Davey Track (5 days) and the South Coast Track (8 days).

The remote Walls of Jerusalem National Park is situated in the center of Tasmania and covers an area of 518 sq km. There is no road access to the park, which means the park can only be explored on foot on designated walking tracks. The region’s geographical remoteness, alpine vegetation and extreme unpredictable weather contribute to a rugged and wild atmosphere that must be felt to be experienced.

The natural features of the Walls Of Jerusalem National Park park include captivating alpine forests, glacial lakes and tarns, dolerite peaks, glaciated moraines and a series of craggy hills that resemble a wall, hence the park’s title.

The park’s alpine species are delicate and visitors are requested  to remain on the park’s carefully crafted wooden walking trails.

The park is suited to adventurous bushwalkers and skiers as the weather is unpredictable, the terrain is rugged and the flora and fauna quite fragile.  Sudden changes in weather can make walks difficult and dangerous at times.

The entrance to the park is via a 30 min walk from the car park at Lake Rowallen. From there, tracks lead to Herod’s Gates, Dixon’s Kingdom and Mt. Jerusalem. A campsite is available at Wild Dog Creek where a platform and toilet facilities are available.

One of the park’s most popular attraction is King David’s Peak.  With a height of 1499 meters, King David’s is the tenth highest peak in Tasmania. Climbing the peak can be challenging but the spectacular views of the park and surrounding areas make the effort more than worthwhile.

Access: By foot only. Nearest Car Park at Lake Rowallan off the Mersey Forest Road.

The Hartz Mountain National Park is located in the south of Tasmania near Geeveston and is considered to be the “gateway” to the south west wilderness of Tasmania. The park occupies an area of 65 km sq and became a part of the World Heritage in 1989. The landscape of the park includes glacial lakes, waterfalls, towering peaks, deep gorges and alpine moorlands. The main physical feature of the Hartz Mountains National Park is the dolerite range that runs centrally through the entire length of the region.

The park has diverse vegetation that changes with altitude. Rainforest, including many species of eucalypt are found in abundance at lower altitudes while alpine species dominate the upper areas.  The diversity of flora and fauna found here is extensive, and the area is renowned for it’s various species of frogs — particularly the moss froglet discovered in 1992.

There are no camping facilities within the park but basic facilities like shelters, toilets, picnic tables and barbecues are available. The Waratah Lookout, Lake Osborne and Arve Falls are simple walks while treks to Lake Esperance and Hartz Peak have a higher degree of difficulty.

The Hartz Mountains National Park is a wonderful escape from civilization as there are many isolated and scenic spots to be discovered… but be prepared  for sudden weather changes, rainfall, strong winds and extreme temperature fluctuations.

Address: Near Geeveston south of Huonville.

Macquarie Harbour is the largest natural harbor in Tasmania and is globally recognised for its ancient untouched forests, diverse geological features and cruel convict history.

Discovered by a group of soldiers in the early 1800s while looking for Huon Pine, the harbour’s inaccessibility made it a suitable location for a penal establishment. Sarah Island, the most brutal penal settlement in Tasmania’s convict history, was established in the middle of Macquarie Harbour.

To the south of Macquarie Harbour lies the Cape Sorell Lighthouse and to the north of Hell’s Gate is the famous Ocean Beach which gets full force of the wind and sea from the Southern Ocean, where powerful swells can reach up to twenty metres.

The best way to discover the region’s world-class wilderness is by taking a Gordon River Cruise. Visitors can tour of the ruins of Sarah Island, travel through Hells Gates and see a Huon Pine tree with roots 20,000 years old.

The Tahune AirWalk is a carefully constructed steel walkway suspended high amongst the trees in the Tahune Forest, located in the Huon Valley. Since its opening in 2001, the AirWalk has become a major regional attraction and is one of the most visited destinations in Tasmania.

The AirWalk is 620m steel walkway suspended above the Huon and Picton Rivers amongst a majestic canopy of tall trees.  The height of the walk varies between 25 meters and 48 meters above the ground and it usually takes half an hour to walk through. Wheelchair access is provided. There is also a Huon Pine Walk and for thrill seekers, the Eagle Hang Gliding Adventure.

Explore more of Tasmania on another trail.