High in the mountains on Tasmania’s west coast, a priceless piece of steam history carefully carries guests along a rugged railway track. Gaze from the window of your comfortable carriage and experience an unforgettable combination of Tasmanian history, wilderness and railway engineering…

The West Coast Wilderness Railway is an award-winning railway and wilderness experience located on the west coast of Tasmania. The lovingly restored steam journey connects the historic towns of Queenstown and Strahan and is a wonderful way to experience a combination of Tasmanian wilderness, history, cuisine and hospitality.

Attracting tens of thousands of visitors every year, the railway is an essential visit for anyone on the west coast of the island. The railway’s trains, track and stations were lovingly restored from their service as a mining railway and accurately represent the engineering and style of the steam era.

The railway’s track and engines feature a special ‘rack and pinion’ system (called the ‘ABT’ system) designed to pull each train up the steep, mountainous inclines.

The track between Queenstown and Strahan was originally built to service the requirements of a long-gone mining era and weaves through ancient Tasmanian wilderness, ravines and gorges. The journey stops at three stations along the way:

There are few better ways to experience Tasmania’s history and wilderness. Watching clouds of steam rise through the branches of ancient trees as the locomotive ascends through the mountains is nothing less than mesmerizing. 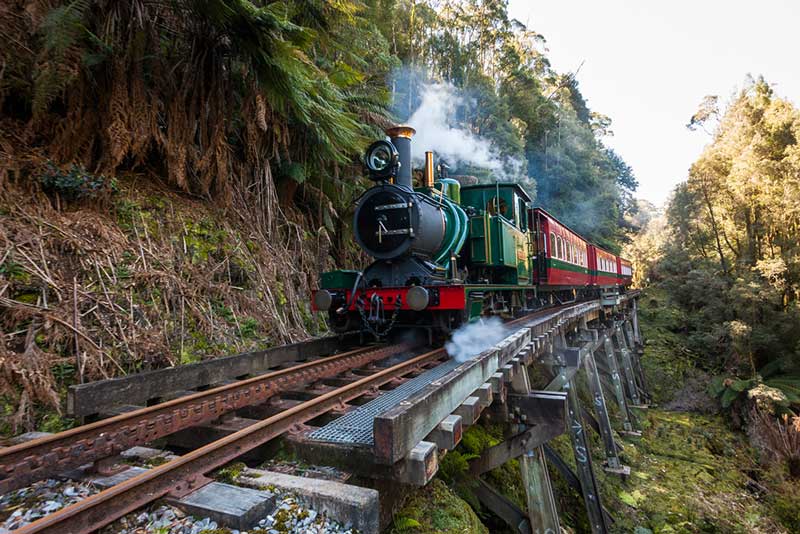 The locomotive’s atmospheric carriages gracefully bump and click along the carefully maintained track. 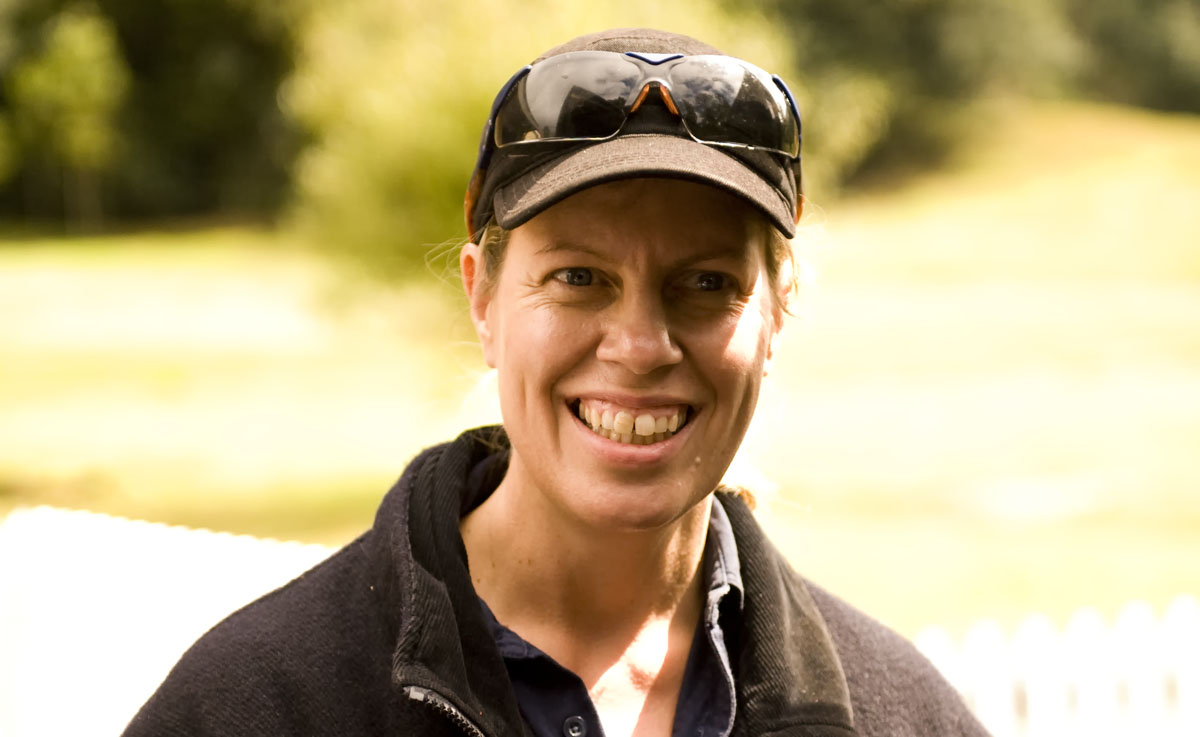 Allie Hume is a fireman and trainee driver who brings life to the carefully maintained locomotives. As fireman, her role is to ensure the locomotive operates smoothly for every journey up and down the steep track.

During journeys she travels with the driver and monitors engine performance to ensure the locomotive operates at a quick and comfortable canter. When the train is stationary, she chats with guests and answers any questions they may have about the railway, the locomotives and their history.

It’s not hard to see why Allie is so passionate about her job – she gets to traverse beautiful mountains and rainforest every day, meet people from all over the world and work with elegant steam machinery.

“Working on these living, breathing locomotives, where each one is different, is brilliant,” Allie says.

“Steam gets into your blood.”

Allie’s career with the West Coast Wilderness Railway began in 2001. Since then she has held many different roles, including selling tickets, giving guided commentary, working in the kitchen and working on the track.

“I love what I do. It’s easy being able to share how much I enjoy being here, because of how passionate I am.”

“It’s privelege to work on the railway. It’s exciting to come here each day and share this amazing place with others. The west coast and the railway becomes part of you.”

Allie Hume turning the locomotive around at Dubbil Barrel

This experience caters for all types: Train enthusiasts are guaranteed to run out of film on their cameras. Wilderness enthusiasts experience some of the cleanest air in the world. And everybody else gets to sink back in their seat and absorb the rhythmic and relaxing pulling of the steam engine through the peaceful wilderness.

History Of The Railway

In the late 1800s, the area directly to the north of Macquarie Harbour was a hive of activity. Zeehan was one of the largest towns in Tasmania because of the silver-lead mined here. Nearby Queenstown was, and still is, a bustling copper-mining town. Strahan, on the shores of Macquarie Harbour, was a thriving port.

It was against this background that the Queenstown-based Mount Lyell Mining and Railway Company decided to build a railway to link Queenstown to Strahan so that they could transport the mined copper to the port. They had one problem, though: The terrain here is made up of rainforest and steep mountains. The company decided to tackle this issue by using what was then a state-of-the-art rack-and-pinion system called the Abt system for the steep sections. This system was designed in the 1880s by Swiss locomotive engineer Roman Abt and the Mount Lyell company’s railway would be the first in Australia to use this technology.

The track had a narrow gauge of 3 feet and 6 inches. To construct it, workers used picks and shovels. They also built a whopping 42 bridges along the route of 34 km or so. One of these bridges was the Quarter Mile Bridge, for which workers had to spend most of their time waist-deep in water to drive the pylons deep enough into the silt at the bottom of the river.

In late 1892 the railway started operating but it was officially opened only in 1897. At first it only ran between Queenstown and Teepookana on the banks of the King River. However, in 1899 the line was extended to Strahan, from where it linked to the Government Railway that led to Zeehan. For the next three decades, the railway provided the only access to Queenstown.

The railway operated until 1963, after which the tracks fell into disrepair. During the 1990s restoration work was begun and in December 2002 the Abt Wilderness Railway started operating as a tourist railway, using some of the original steam locomotives. One of these dates from 1896, one from 1898 and one from 1938. After a brief closure in 2013, the railway reopened in early 2014 and it is now operating as the West Coast Wilderness Railway.

While departure times and sometime change throughout the year (please check the West Coast Wilderness Website for details before you visit the west coast), visitors can choose to board at either Queenstown or Strahan.

There are three routes you can take, each with two classes of carriage and each with a guide who will tell you more about the train and the points of interest along the tracks. If you want to travel mainly the Abt section, you can take a half-day Rack and Gorge journey from Queenstown to Dubbil Barril and back. At Dubbil Barril you can take a stroll through the rainforest or watch the King River rush by as the train is being turned.

Another option is to travel the River and Rainforest route from Regatta Point in Strahan to Dubbil Barril and back. This section will take you along the King River, offering stunning river and rainforest views.

If you want it all, however, it’s best to opt for the full-day Queenstown Explorer journey that takes you from Strahan to Queenstown and back. Along the way the train stops at Dubbil Barril, Rinadeena and Lynchford. The stopover in Queenstown lasts for an hour, giving you enough time to explore, have something to eat at the Tracks Café, visit the Abt Railway Museum or pick up something from the gift shop.

The days and times that the different journeys operate depend on the time of year, with services much more limited in winter. It’s best to check beforehand what is running when and it’s also essential to book in advance, especially in the summer high season. Both Queenstown and Strahan offer plenty of accommodation options for every budget.

Coming off the turntable at Dubbil Barrel

How To Get There

Directions to Queenstown: Drive 3 hrs 30 minutes drive north from Hobart on the Brooker Highway and Lyell Highway. Distance is approximately 259 kms. From Launceston drive 3 hrs 30 minutes west on the Bass Highway to Burnie and then south on the Ridgley Highway. Turn left onto The Murchison Highway and travel through Rosebery. Then left onto The Zeehan Highway to Queenstown. Distance is approximately 260 kms.

Directions to Strahan: From Hobart, drive 4 hrs drive north on the Brooker Highway and Lyell Highway. Distance is approximately 300 kms. From Launceston, drive 4 hrs drive west on the Bass Highway to Burnie and then south on the Ridgley Highway. Turn left onto The Murchison Highway and travel through Rosebery. Left onto The Zeehan Highway to Queenstown and then The Lyell Highway to Strahan. Distance is approximately 300 kms.

Leaving Queenstown Station for the wilderness.

Taking on water at Lynchford Station