The city of Hobart offers something for everyone: history, art, architecture, culture, food and a gateway to the colourful regions of southern Tasmania.

Hobart is the capital of Tasmania and lies along the island’s southeastern coast, where the Derwent River flows into the picturesque Storm Bay. The city of Hobart lies at Sullivans Cove on the Derwent’s river’s western bank is surrounded by vibrant suburbs, where the vast majority of Hobartians call home.

At nearly 43 degrees south of the equator, Hobart is more or less on the same latitude as Christchurch in New Zealand and South America’s Patagonia region. Hobart is officially Australia’s coldest city however due to its southern location, Tasmanian summer days seem to last forever.

Along with all its suburbs, greater Hobart covers an area of a little under 2,000 km2, making it a little larger than London in the UK. Unlike London with its more than 8 million inhabitants, Hobart is home to only 218,000 people.

Out and about in Hobart

The most prominent feature of the Hobart skyline is Mount Wellington, which stands sentinel over the city and can be seen from dozens of kilometres away. Views from the pinnacle seem to go forever and provide a great way to g capture the ‘lay of the land’ of the greater Hobart region. The easiest way to reach the pinnacle is by car, although many walkers reach the top via a series of challenging walks and trails.  After visiting the mountain, visitors quench their thirst at the Cascade Brewery, located at the foot of the mountain. Operating since 1832, Cascade is the oldest continually operating brewery in Australia.

Strolling along the historic streets of the Hobart CBD is the best way to soak up Hobart’s vibe and culture. For example, the Tasmanian Museum and Art Gallery, the Maritime Museum of Tasmania and the Hotel Grand Chancellor Hobart, home to the Federation Concert Hall and the world-renowned Tasmanian Symphony Orchestra, are located near one another between Davey and Macquarie Streets.  Campbell Street is home to the Old Hobart Gaol featuring the fascinating Penitentiary Chapel, as well as Australia’s oldest theatre, the Theatre Royal.

One of the most important regions in Hobart is located south of Murray Street and leads off Davey Street towards the east. Known as Salamanca Place, this busy part of the city is home to Parliament House, rows of historic warehouses and the internationally famous Salamanca Market. Along the western shore, around Franklin Wharf, lies the Waterfront district with its many restaurants and nightspots. Just south of the Salamanca district is chic Battery Point, where visitors find find many historic buildings, slim European streets and homes of the ‘who’s who’ of Hobart.

In the CBD area, there are seven streets that date back to Lachlan Macquarie’s original plan for the city. Of these, Harrington, Murray, Elizabeth and Argyle Streets run in a north-westerly direction while Liverpool, Collins and Macquarie Streets run in a north-easterly direction, parallel to the river. Macquarie Street is a one-way street which, together with Davey Street that runs alongside it in the opposite direction, form the A6. The A6 connects with the Southern Outlet in South Hobart, as well as with the Brooker Highway or National Route 1 to the north and the Tasman Highway, also known as the A3, to the east. The Tasman Highway crosses the Derwent via the Tasman Bridge and also passes Hobart International Airport.

One of Hobart’s most popular attractions is located about 11 km upriver at Berriedale. The Museum of Old and New Art, or MONA, can be reached by road but is also accessible by river vessel from the Waterfront area. The journey from the CBD to MONA by boat is a picturesque way to experience the scenery of Greater Hobart and visitors are able to spot Risdon Cove, the site of Hobart’s very first settlement led by young John Bowen, on the eastern bank just before the Bowen Bridge.

Hobart’s most famous regular ‘foodie’ attraction is the Salamanca Market on Saturday mornings, where Hobartians and visitors alike flock to sample fresh food and produce from all over the state.  For a sweet fix on a weekday, combine a visit to MONA with a trip to the Cadbury’s Chocolate Factory in Claremont, just a little upriver.

About 12 km to the south of the CBD is Kingston, which almost feels like a separate town even though it’s really a suburb of Greater Hobart. Kingston is the gateway to the Huon Valley, Bruny Island and the D’Entrecasteaux Channel.

The many coves along Greater Hobart’s shoreline make for plenty of wonderful sheltered beaches. Some of the best beaches are to the east and southeast and include Seven Mile Beach, Clifton Beach and Lauderdale. However, there are fantastic beaches closer to the CBD too, such as the beaches of Sandy Bay, a very upmarket suburb just south of Battery Point.

Sandy Bay is also home to the Wrest Point Hotel Casino, a tall and curious building instantly recognisable on the Hobart skyline. When it opened back in 1973, Wrest Point was the first licenced casino in Australia.

The city’s location in the Roaring Forties (40 degrees south of the Equator) makes Hobart a sailing paradise, where the most popular annual event is the Sydney to Hobart Yacht Race, held just after Christmas. A great time to be out on the water is in late winter or spring, when whales come to feed in the Derwent estuary.

There are many other wildlife species to see in and around Hobart’s parks and wilderness areas. The best way to get up close and personal with Tasmanian devils, pademelons and bettongs is by taking a trip the popular Bonorong Wildlife Sanctuary.

While Hobart is the perfect city for the active traveller, it’s a great place too for those who prefer watching from the sidelines. Bellerive, across the river from the CBD, is home to the Bellerive Oval, the home ground for the Tasmanian Tigers cricket team. 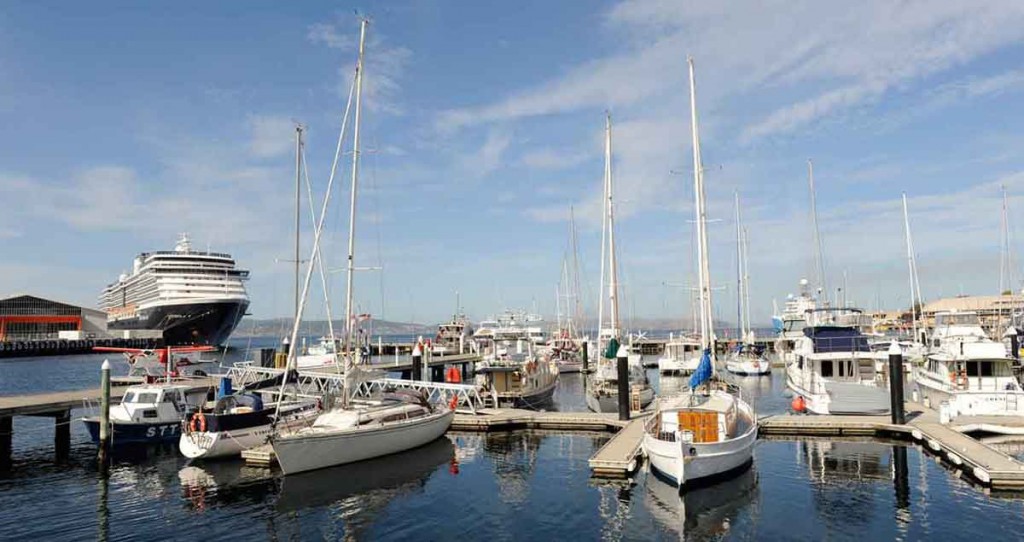 The story of Hobart

Before the arrival of the first Europeans in the area that would become Hobart, the Mouhenneener people used the Derwent estuary as their hunting grounds. The Mouhenneener were a small band of the South East Tasmanian Aboriginal tribes and were semi-nomadic. The coves along the Derwent provided shelter and there was an abundance of seafood in the area. Much of the archaeological evidence of the Mouhenneener’s way of life in pre-colonial times has been lost, however visitors can still find shell middens along the banks of the Derwent.

Abel Tasman never managed to land along this part of the coast when he made his 1642 voyage. He gave Storm Bay its name, though, which may be a clue to why he missed the Derwent. By the end of the 18th century, however, British and French explorers visited the Derwent in quick succession.

Britain and France were sworn enemies at the time and the British became very uncomfortable when the French showed interest in the area. Philip Gidley King, who was governor of New South Wales, had the perfect solution: Get there first. He sent the Albion, a whaler under command of John Bowen, to start a settlement in what was then still called Van Diemen’s Land. Bowen, who was only 23 at the time, headed a group that consisted of 24 convicts, three of whom were female, as well as their guards and some free settlers. They landed at Risdon Cove along the Derwent in September 1803.

At the same time, David Collins was sent to start a settlement at Port Philip, where he arrived in October 1803. Collins didn’t like the location and decided to join the settlement at Risdon Cove. He was a colonel so when he arrived, he took command from Bowen, who was a mere lieutenant.

Collins wasn’t too impressed with Risdon Cove and decided that they should move the settlement to Sullivans Cove, about 5 km downriver. They landed here on 21 February 1804 and founded what would soon become Hobart Town, Australia’s second oldest city.

Things weren’t easy in those early years. Building materials were difficult to come by and several supply ships never arrived. Winters were cold and wet while summers brought heat and drought. However, the settlers persevered and in 1806 and 1807 they even produced a surplus of wheat and other crops.

Hobart Town attracted a growing number of people, not all of them upstanding citizens. Crime was a big problem, as were drinking and fighting, especially near the docks. In 1811 the newly appointed governor Lachlan Macquarie visited and found quite a disorganised settlement. He drew up a proper town plan and initiated major construction projects. Hobart Town soon became not only the administrative centre for Van Diemen’s Land but also an important port, shipbuilding centre and whaling and sealing base.

Even though Hobart Town was really established as a way to beat the French, it was clear that this isolated place was the perfect location for a penal colony. In Hobart Town itself, the vast majority of convicts enjoyed relative freedom.  Only 6% were kept in jails such as the Campbell Street Gaol full-time while the rest worked on government construction projects or as indentured labourers for the free settlers, many of whom owned thriving farms in the area. However, conditions in nearby penal settlements such as Port Arthur were harsh and Van Diemen’s Land soon became synonymous with prisons with ‘hellhole’ reputations. Convict transportation was abolished in 1853 and when Van Diemen’s Land became a separate colony three years later, its name was changed to Tasmania in a bid to leave its notorious convict past behind. In 1881, Hobart Town officially became simply Hobart.

During the next century or so, the town continued to grow, although it also suffered from economic depressions and periods of decline. Since the 1950s, better transport links led to a huge increase in tourism and the city’s fortunes. In 2012, Lonely Planet named Hobart one of the top 10 cities to visit in 2013 and when the travel bible listed Tassie as one of its top 10 regions to visit in 2015, it described Hobart as Tasmania’s ‘super-cool waterfront capital’ and the driving force behind the state’s hip new image.

One of the best things about Hobart is that it’s impossible to be bored here. Not only is there something for everyone but there’s always something on as well. Hobartians love a good festival, for instance, and some of the best excuses to visit this ultra-cool corner of Australia are MONA FOMA, the Hobart Summer Festival and Australia’s oldest sporting event, the Royal Hobart Regatta, which has been going since 1838.