> Click Here to go to the Video Clips of Oatlands Page <

It’s lakeside setting already makes Oatlands an idyllic place to spend some time but there’s another good reason to make the detour when you’re travelling between Hobart and Launceston: Oatlands has more sandstone heritage buildings than any other town in Australia.

The tiny town, which has a little over 500 inhabitants, lies about 85 km north of Hobart and about 115 km south of Launceston. National Highway 1, also known as the Midland Highway, curves around the edge of Oatlands. The town lies along the northern shore of Lake Dulverton, a shallow lake that is popular with anglers, birdwatchers and campers alike. The lake is reportedly also home to not one, but two types of mythical creature: its own version of the Loch Ness monster and a Yowie, Bigfoot’s Australian cousin.

Not much is known about the precolonial history of the Oatlands area but the first European recorded to have lived in the area was Richard Lemon, whose name is immortalised in nearby Lemon Hill and Lemon Springs. Lemon was one of the earliest bushrangers in Tasmania and by most accounts also one of the most vicious. He shot and killed one of his gangmates for speaking Gaelic and another victim was killed by being wrapped in the hide of a stolen cow and then being thrown into the fire. In 1808, a member of Lemon’s gang killed him at his hut at Lemon Hill and took his severed head to Hobart to claim the reward. 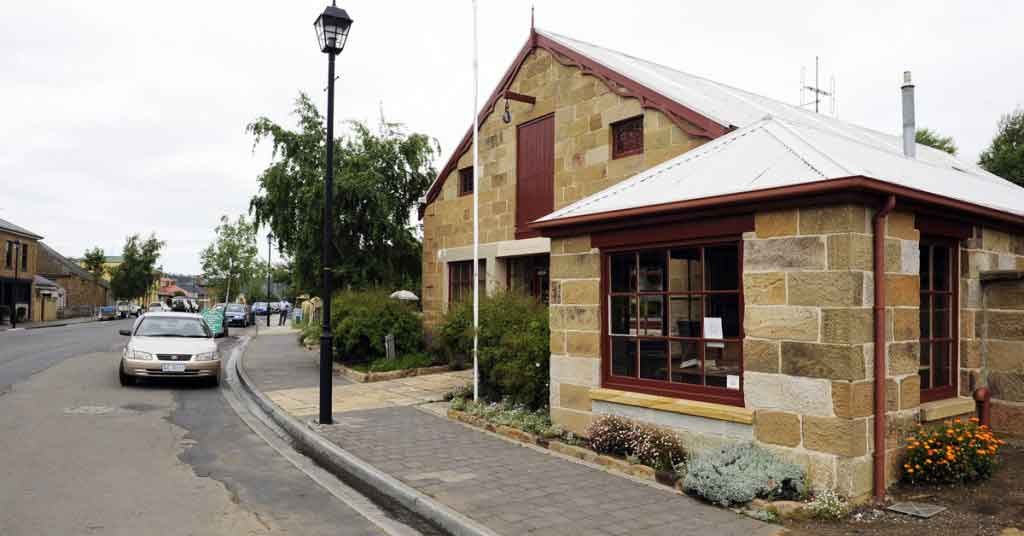 Oatlands was officially founded by Governor Lachlan Macquarie in 1821. There are two theories about the name: One is that Macquarie named the settlement after a town in Surrey, England and the other is that the setting reminded him of Scotland and good agricultural land for growing oats. The settlement was to be a military post but there were already free settlers in the area. This meant that even though much of the infrastructure was built with convict labour, there was also a more natural, free aspect to the development of the town.

However, the Black War between the settlers and the Aboriginal population was fought fiercely in the area and the first military detachment, under command of Ensign Thomas Everden, was sent to Oatlands in 1825. In 1826, Thomas Anstey was appointed the settlement’s first police magistrate. The town really started to develop in 1827, when 35 skilled tradesmen were sent here to lay the foundations. One of Oatlands’ early inhabitants was Solomon Blay, a hangman who was so unpopular that he reportedly had to walk to Hobart or Launceston for executions, since the coachmen wouldn’t take him. Another famous inhabitant was Dr Kevin O’Doherty, the Irish nationalist convicted of treason and sent to Tasmania in 1849. He lived in Elm Cottage, which dates from around 1837 and today is used as a clothing, homeware and gift shop in High Street.

The oldest building in Oatlands is the Oatlands Court House, which dates from 1829 and is Australia’s oldest rural supreme court. Oatlands got its post office in 1832 and by 1835 there were about 200 dwellings in town, including stores, mills, breweries and seven hotels. Oatlands Gaol opened in 1834 and was designed by colonial architect John Lee Archer, who also designed the hospital opened in 1836.

Callington Mill was built in 1837 and is Australia’s third oldest windmill. It has been restored and is now the only fully operational Lincolnshire windmill in the Southern Hemisphere.

The foundation stone for St John’s Catholic Church was laid in 1850. This church was designed by Augustus Pugin, the renowned English architect whose other achievements include Big Ben and Alton Towers. One of the volunteers who helped build the church was Kevin O’Doherty, who had resolved to spend his time as a political exile in Oatlands in a useful way. It’s no wonder that the good doctor was nicknamed Saint Kevin.

Today part of the magic of Oatlands is the way in which the 150 or so sandstone buildings have been repurposed as private homes, restaurants, shops and other small businesses, such as the Casaveen Knitwear Factory, which offers tours in which you can learn about every step in the process of producing fine merino-wool clothes. While a simple shopping trip is a good way to discover the heritage of the town, you may also want to stay the night and go on a fun ghost tour of Oatlands’ beautiful buildings.